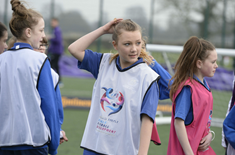 The Football League Trust proudly launched its Female Football Development programme (FFD) throughout England in 2014, with a goal to ‘Inspire the Future Female Game’.

Playing an integral role in the progression of the Women’s & Girls’ game, FLT is driving participation growth and retention, as it delivers thousands of FFD sessions built upon an ethos of fun, friends, and fitness.

54 clubs are delivering FFD sessions aimed at 14-25 year-olds with Level 2 qualified coaches, in cohesion with County FAs, Schools, Colleges and Universities to engage with fresh participants, as part of the new FA Women’s and Girls’ programme. £2.4m will be invested over the next two years from Sport England funding, in an attempt to make Women’s Football the second most played team sport in England, by reaching over 40,000 new players. FFD is playing a pivotal part of this, accounting for over a third of the national target.

Scunthorpe United CSET are committed to the development of female football in North Lincolnshire and are proud to deliver sessions to year 10 and 11 girls at secondary schools throughout North Lincolnshire. If you are a student or a teacher who is interested in our FFD programme and would like to find out more please contact sufctrust@scunthorpe-united.co.uk.

The remit of Scunthorpe United CSET is to use the power of football as the catalyst to enact positive change within our local community.
READ MORE